In addition to a rich academic life, many All Saints students participate in sports through the Catholic Youth Organization. Boys and girls alike take part in basketball, while girls are also able to play volleyball. 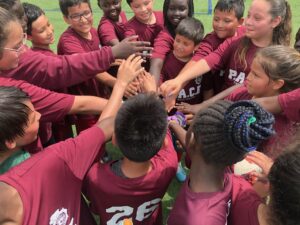 In athletics, as it is in the classroom, student-athletes learn much more than just the basics. It is true that All Saints Student-Athletes learn how to shoot baskets, but through sports they also learn valuable life lessons like fair play, winning and losing with grace and dignity, and perhaps most importantly, how to be part of a team.

All Saints Athletics are exciting for both students and spectators. Join us at our next game!

Our partnerships:  Police Athletics for Community (PACE) offers athletics at no cost to youth. Their mission is to keep kids off the streets and develop discipline, self-esteem, and positive moral values. Pictured is the 2021 All Saints School soccer team giving it their all.

Learn more about the sports that we offer:

All Saints is proud to recognize the following for their success this season:

Archery is introduced to students, starting in 3rd Grade, as part of the Physical Education unit.  Interested students can sign up to take part in the after-school program that will allow additional training and preparation to the NASP Archery Tournament.

The Nebraska Game and Parks hosts a Nebraska Archery Tournament, held in Lincoln, Nebraska, in March.  Students from all over the state take part in this tournament to try to win scholarships and qualify for the national tournament in Kentucky.

The Nebraska State Tournament will take place on March 19, 2016, at the Speedway Sporting Village.

All Saints Catholic School is very fortunate to have an Archery expert donate his time and equipment to the school.  Tom Saunders, from Saunders Archery, has helped grow the sport within All Saints throughout the years.  Saunders Archery has a significant presence at the Nebraska Archery Tournament, as well as in tournaments around the country.  We are extremely grateful to Mr. Saunders for all that he has done with our Archery unit.

To learn more about the Archery unit, please contact the Sports Club.

All Saints is proud to have successful basketball teams every year. All Saints is part of the CYO (Catholic Youth Organization) League and our season runs from November through March, with the CYO Tournament finishing up the season.

All Saints also hosts the All Saints Holiday Shootout, which officially kicks off the season at Holy Name in December. This is a two to three week tournament drawing in over 60 teams every year.

Also, since the 2014-2015 season, basketball has returned to All Saints. We host games for a few weekends each year to help bring in additional money for the Sports Club.

To learn more about the basketball at All Saints, or learn how you can volunteer or donate, please contact the Sports Club.

All Saints is proud to have successful volleyball teams every year. All Saints is part of the PAL League and our season runs from late August through the end of October / early November, with the PAL Tournament finishing up the season.

Signup forms went home with girls in 3rd through 8th grades this week. Due to some changes in teams, the girls will be playing in a different league this year, and they start sooner than the GSA League did. Mr. Riera and the other coach will be contacting players with practice schedules as soon as all the forms are turned in. The Sports Club is asking that all formed be turned in by Monday, August 28th if you are interested in playing volleyball for All Saints this year. Thank you.

To learn more about the volleyball at All Saints, or learn how you can volunteer or donate, please contact the Sports Club.