Located south of the Old Market in Downtown Omaha, All Saints’ student body embraces diversity and an environment in which each student’s heritage is celebrated and accepted.

All Saints draws support from private donors and a supportive neighborhood. Neighbor icons like Orsi’s Bakery, The Sons of Italy and Christ Child Society have been joined by new construction of residential homes and condominiums, and the addition of new businesses. Like All Saints itself, the neighborhood is on the move!

All Saints is a short distance from the Durham Museum, Grace University, Henry Doorly Zoo and Aquarium, TD Ameritrade Park and CenturyLink Center.

(First school picture of the new St. Philomena school in the 50’s)
** photo courtesy of Dennis Bullaro via Facebook post, used with permission **

The churches that currently support All Saints are:

All Saints was founded to fill the needs of the families of downtown and eastern Omaha, and has been doing so for many years.

The first accounting of our school history dates back to 1906 when the Christ Child Society Chapter of Omaha, Nebraska founded and chartered its mission to support and teach neighborhood children. Stella Hamilton, who later became Stella Stapleton, visited Washington, DC and met Mary Virginia Merrick. She returned to Omaha with a commitment to human service. At that time, she enlisted the help of Rev. Mother Mary Hoban, RSCJ and with the permission and support of Bishop Richard Scannell, she organized a Chapter. Their work led them to buy a house across the street from the church to begin providing religious formation and after school activities for the immigrant children in the neighborhood. Between the 1930’s and 1980’s the Omaha chapter of Christ Child was one of the most active in the nation providing numerous activities for children. Christ Child built a new facility in 1968, on the site across from the church, which housed an indoor swimming pool, gym, classrooms and an apartment for Mary Flannigan who coordinated the activity center.

The community living near 10th and William had been sending their children to neighboring Catholic Schools but desired their own. In 1955, sufficient land and money had been obtained to build a new Catholic school. That school thrived until the 1980’s when changing demographics forced the schools southeast of downtown Omaha to work together. Initially, the students were spread out in buildings at Immaculate Conception, St. Patrick’s and St. Frances Cabrini. Later they were consolidated into the building at St. Frances Cabrini which was renamed All Saints in 1956. The consolidated school’s include: St. Philomena, St. Frances Cabrini, and Catholic Southeast. The project was sponsored by St. Peter’s, St. Ann’s, St Patrick’s, St. Joseph’s, Immaculate Conception and St. Frances Cabrini. As parish closures made support more difficult, the Archdiocese asked CUES to assume responsibility for the school in 2013. 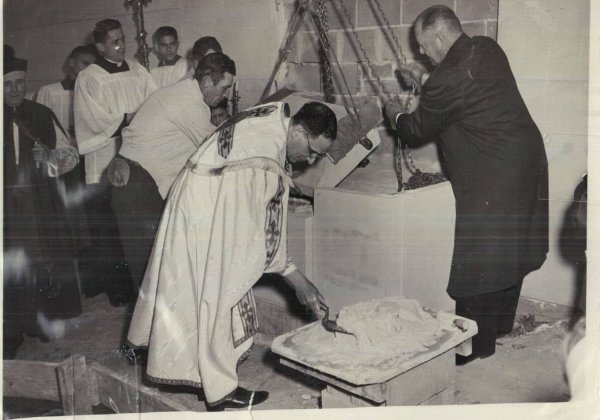 (Putting in the corner stone just before St. Philomena school was opened)
** photo courtesy of Dennis Bullaro via Facebook post, used with permission **

If anyone was a member of the above schools, in addition to All Saints, we invite you to join our Alumni group.

All Saints has been educating Omaha students, pre-kindergarten through eighth grade, for over 100 years.